I’ve been astonished by the amount of bacon, sausages and ham that my Northern Irish

clients eat everyday. One 19 year old, who has recently been diagnosed with a bowel condition called Ulcerative Colitis, seemed to be eating bacon or sausages at breakfast, lunch and dinner!

So what’s wrong with sausages and ham?

Research has shown that processed meats like these increase your risk of bowel, stomach and pancreatic cancer.

One of the reasons may be that chemicals called nitrites are often used to preserve processed meat. In the bowel nitrites can be converted into cancer-causing chemicals called N-nitroso compounds (NOCs). The presence of these chemicals may explain why many studies have found that processed meat increases the risk of cancer to a greater extent than red meat.

Can I buy sausages and ham that don’t contain nitrites? YES!

My children LOVE sausages and ham. For years, I have borne the ‘Mummy Guilt’ of giving them food that could potentially be carcinogenic, so I tried to limit the amount they were having. It has taken me this long to find my personal Holy Grail of reasonably priced nitrite free versions (I am still on the hunt for nitrite free bacon!)

Established in 2011, The Good Little Company is a Northern Ireland based sausage brand which gives 50% of its profits away to three charity partners in Africa- Christian

Where To Buy: Waitrose, Ocado, Tesco (NI) and Dunnes Stores (NI)
So what’s the verdict of the family taste test? They were definitely a big hit with my 3 kids (and their friend Charlie who joined us for dinner after school on Tuesday night!)

Other nitrite free sausage options: look out for organic sausages as these should be nitrite free

Denny is the only ham available in supermarkets that has 100% natural ingredients. The Traditional Style Ham has just Pork with Sea Salt, Demerara Sugar and Natural Flavouring (celery and rosemary). Perfect for quick ham sandwiches in the packed lunches!

Where to Buy: As far as I am aware, unfortunately this ham isn’t available outside of Northern Ireland and the Republic of Ireland. Available in NI at Sainsbury’s, Tesco and Asda.

Although nitrite free, it is still important not to go crazy on these sausages and ham, as there is also an association between red meat and some cancers. I try to mix meal times up with fish, chicken, turkey and eggs for other good protein sources. And of course plenty of veggies, fruit and wholegrain foods.

Sarah Williams, health information officer at Cancer Research UK, said: “We already know that not smoking, cutting down on alcohol, getting plenty of fruit and veg and staying active can reduce the risk of developing cancer. Keeping a healthy weight will help to reduce your risk of cancer, so try and be physically active and eat a healthy balanced diet with plenty of fruit and veg and fibre, and cut back on red or processed meat, saturated fat, and salt.”

Here’s a helpful and simple infographic from Cancer Research UK on how to reduce your risk of food related cancers: 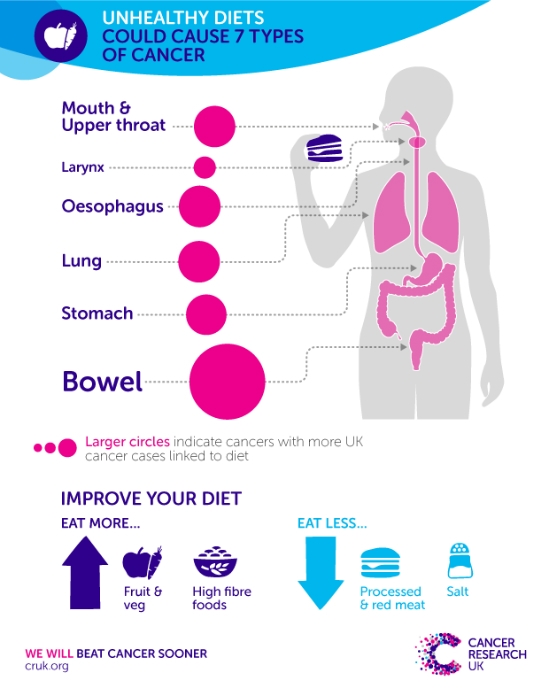 I am a UK Registered Dietitian with 23 years of experience in the NHS, private practice and lecturing. Living in Bangor, N. Ireland and mum to 3 kids. I specialise in sports nutrition, gastrointestinal issues, disordered eating and hormone health.

This blog is to share tried and tested recipes and good food ideas.